The sustainable management of marine biological resources in the north generates significant added value for Norwegian and Russian society. 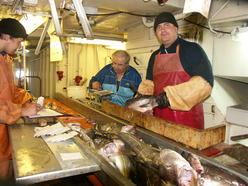 The cooperation between the Institute of Marine Research in Norway and PINRO in Russia dates back to the start of the previous century, and was formalised towards the end of the 1950s. The cooperation started out tentatively with joint research meetings, during which plans for and results of national investigations were discussed. With time, this developed into joint investigations, exchange of researchers and data, specialist conferences and joint databases.

Since the very beginning, one key element has been supporting joint management of the fish resources in the Barents Sea. The research results have been coordinated via the International Council for Exploration of the Sea (ICES) and utilised by the Joint Norwegian-Russian Fisheries Commission. As a result of the close research cooperation, the Barents Sea is now one of the best managed sea areas in the world, with large fish stocks providing sustainable and high annual yields.

In accordance with the United Nations Convention on the Law of the Sea (1982), the coastal states were granted ownership of the natural resources covered by 200-mile economic zones. In the Barents Sea, the major fish stocks (cod, haddock, capelin etc.) can be found in both the Norwegian and Russian zones, requiring joint management. The Joint Norwegian-Russian Fisheries Commission was founded in 1975. Its task is to agree upon quotas, mutual access to fishing in the economic zones, control measures and technical regulations such as mesh width and minimum fish size, and to provide advice on the management of seals and shellfish. The Commission also agrees an annual research protocol, laying down guidelines for research cooperation. The impact of climate changes on the live marine resources is one relevant field which requires further research.

The sustainable management of live marine resources in the north generates significant added value for Norwegian and Russian society. Sustainable management requires research and a good knowledge of the live resources and the ecosystems of which they are part. For many years now, Norway and Russia have jointly developed surveillance and research activities in the north, forming the basis for scientific advice on sustainable management. All Norwegian-Russian surveillance data and research results from joint investigations are coordinated and quality assured by the International Council for Exploration of the Sea (ICES), which then presents the management advice.

current and future generations. We hope our cooperation will provide a global role model, which is why we want to share it», explain Andrej Krajnij and Jørn Krog.